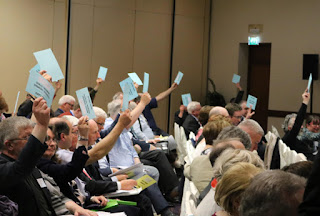 At General Synod 2018 the Church of Ireland will take an important vote on whether to exclude investments from all fossil fuel companies. It is important for two reasons, one financial and the other ethical. But before I turn to answer those questions I’d like to answer a question some might be asking,

What are the financial reasons to exclude all fossil fuel producing companies?
Fossil fuel companies were for many years a safe bet for investments. The Investment managers in the Church of Ireland have told me that the dividend payments are generally good. But in recent years the problem of climate change, caused by greenhouse gases largely from burning fossil fuels, has led to problems for major fossil fuel companies. For example, in 2016, Peabody which was the largest coal producer in the world, went bankrupt. Thankfully, the Church of Ireland had already divested from all coal companies before this.

After the Paris Agreement was signed in December 2015 the world economy was put on a track towards decarbonisation with the aim of keeping global warming well below 2 degrees Celsius. This means the future of energy is no longer in fossil fuels, it is in renewable energy. Worldwide in 2017, a record 143GW of energy was commissioned, more than double the 70GW of fossil fuel generating capacity that was added in that year. The growth in worldwide energy investment is in renewables.

The S&P 500 index of various sectors of the stock market indicates that the Energy sector is the worst performing sector over the last 10 years, with a decline of -14.42%.  The policy shifts by President Trump and the oil price rises after the intervention by Opec have led to an upturn in the oil majors’ stock price, but this may be short-lived. A recent survey of fund managers found that 90% of managers expect a negative revaluation of International Oil Companies within 2 years.

What are the ethical reasons to exclude all fossil fuel producers?
The Church of Ireland aims to be an ethical investor and puts Environmental, Social and Governance (ESG) issues at the heart of its investment policy. Currently, investments in tobacco and arms sales are excluded because of the clear risk to human health. The risk to human health from burning fossil fuels comes from air pollution and climate change.

The World Health Organisation estimates that 7 million people a year suffer an early death from air pollution. The Lancet Commission on Human Health found that this was compared to 7 million early deaths due to smoking tobacco.

Climate change impacts on human health are many and varied. A report on ‘The Human Cost of Natural Disasters’  found that whereas the frequency of geophysical natural disasters such as earthquakes, volcanoes, and tsunamis between 1993 and 2000 had remained unchanged, there had been a sustained rise in climate-related events such as floods and storms. Climate-related natural disasters have increased by 44% and a total of 2.5 billion people were affected.

Climate change has been called a ‘threat multiplier’ by the Pentagon. The UN’s refugee agency, the UNHCR, estimates there are an unprecedented 65 million refugees in 2018 and 55% of these come from just three counties: Syria, Afghanistan and South Sudan – all countries that have experienced severe drought and conflict over many years.

It is clear that the impact of burning fossil fuels on human health is immense. Air pollution is at least equivalent to smoking tobacco and climate-change increases the impact further to extremely serious levels. This is why the Lancet Commission said in 2015, “Tackling climate change could be the greatest global health opportunity of the 21st century.”

The risks from fossil fuels on human health are clear. The Church of Ireland already excludes investments in tobacco so it must also exclude investment from all fossil fuels.

Should we not engage with big oil and gas companies?
There are two instruments that ethical investors use to highlight ethical issues of concern – engagement and divestment.

Collaborative engagement is where likeminded investors join forces to raise questions and propose motions at the Annual General Meetings of companies in which they are shareholders. Issues are debated and resolutions voted upon. Last year the Church of England led a collaborative engagement group that successfully had a motion passed at the ExxonMobil AGM. However, the report on climate-related risk that was later published by ExxonMobil was independently assessed as ‘inadequate’.  Following this, the ex-comptroller of the New York State Pension Fund, Tom Sanzillo, said, “The shareholder engagement process increasingly looks like a cynical exercise through which shareholders and fossil fuel companies talk instead of act, the urgency of climate change is denied and real questions of fossil fuel profitability are ignored.”

The alternative is divestment from fossil fuel companies. This tool brands the companies as unethical and makes it more difficult for them to raise capital from lenders, making it a risky investment, and resulting in more companies divesting. The ‘fossil free’ divestment movement has grown rapidly in recent years to the point where £7tn has been moved away from fossil fuel companies and re-invested in green energy projects.

It must be remembered that engagement and divestment are complementary tools in the ethical investor's toolkit. Both can be used at the same time. The Climate Action 100+ initiative encourages collaborative engagement with the world’s largest 100 emitters, which consists of fossil fuels companies and others from the transport, agriculture, food, chemical and building sectors. Engaging with large companies to encourage them to lower emissions and use renewable energy is an important activity for an ethical investor, even those that are fully divested from fossil all fossil fuels.

So we should fully divest from all fossil fuels and continue collaborative engagement to encourage rapid decarbonisation across all sectors.

The vote
The vote at General Synod is a very important one. It is a moment to reflect on financial risks and the ethical issues around fossil fuel investment. Both engagement and divestment are tools that an ethical investor should use.

But one thing is clear – the time has come for the Church of Ireland to fully divest from fossil fuels.