Showing posts from August, 2004
Show all 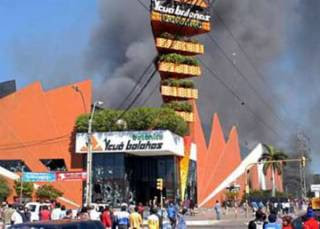 Link: BBC News report Video: BBC News Video Yesterday just after our church had finished we realized something serious was happening when lots of ambulances went flying along the road in front of school. Then police pickup trucks acting like makeshift ambulances went past with burn victims in the back. They were going to the nearby Emergency Hospital. Ycuá Bolaños supermarket This morning the shock of the full extent of yesterday's fire disaster sunk in. Parguayan colleagues came to school with news that our Domestic Science teacher is in intensive care with life threatening burns to her lungs. Also a cleaner's brother had been killed. Later we heard a pupil from the Annex School had died with her preschool sister and cousin. Also some of the maintainance team had nephews killed. Asuncion is small enough for us to know people with family members directly affected. Reports now say 350 killed and 500 injured, perhaps 50% under 13 years old. The supermarket is about 3 mile
Post a Comment
Read more
More posts