Showing posts from January, 2017
Show all

Church of Ireland lags behind the Irish Dáil on ethical investments 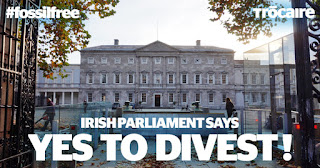 The Church of Ireland has always been slow to change. On ethical investments it is now even lagging behind the Irish parliament. This week the the Dáil, took a step closer to becoming the first country in the world to fully divest from fossil fuels. An Independent TD, Thomas Pringle, introduced his private member's bill on fossil fuel divestment saying it would send an important signal to the world. Speaking about global oil corporations he said, "This principle of ethical financing is a symbol to these global corporations that their continual manipulation of climate science, denial of the existence of climate change and their controversial lobbying practices of politicians around the world is no longer tolerated,"  "We cannot accept their actions while millions of poor people in underdeveloped nations bear the brunt of climate change forces as they experience famine, mass emigration and civil unrest as a result." If the Bill passes into law it would m
Post a Comment
Read more
More posts