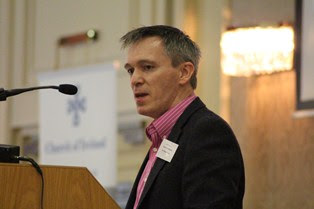 It is certainly good to see the Church of Ireland Representative Church Body (RCB) respond to the issue of climate change.

The article 'From Fossils to Forestry: RCB invests in the future' originally appeared in the Church of Ireland Gazette, 9th May 2016. It indicates that the ethics of fossil fuel investments are at the top of the Investment Committee agenda, which is good to see.


The quotes in blue are from the RCB article on which I have commented to further the debate.  The article begins,


Climate change is an extremely important, complex and topical issue.

Stating that climate change is ‘complex’ sets the mood. It sets the scene that the RCB aims to steer through the rising seas and storms of climate change and chart the best course having weighed all the options. But opening an article in this way is a distraction, for climate change happening. There is no complexity to that fact.

The UN states that global warming is unequivocal and it is caused by human activity, primarily by burning fossil fuels. The Secretary General of the UN, Ban Ki Moon said, “Climate change is an existential threat”. Climate change is the most serious problem humanity faces.

So it was good news that the RCB discussed the topic this year and developed a policy for its investments in relation to climate change. The approach to the topic should be direct, clear and definitive.


The Church of Ireland investment strategy is committed to the support of a transition to a low carbon economy through a comprehensive approach, including reducing demand for fossil fuels through corporate engagement, positive investment in the low-carbon economy and promoting more ambitious public policy on climate issues through its membership of the Institutional Investors Group on Climate Change (IIGCC).

To prevent global warming exceeding 2°C the world needs to rapidly transition to a low carbon economy. This means we need to stop using fossil fuels for energy generation. It has been calculated that the ‘carbon budget’ to keep within the Paris Agreement temperature is 473 Gigatons of CO2. There are 2,427 Gigatons of CO2 in current fossil fuel reserves. Therefore, more than 80% of known reserves must stay in ground if we are to stay below the 2°C threshold.

Corporate engagement means approaching fossil fuel companies to outline plans to be compliant within a 2°C threshold. Companies need to be transparent about decarbonisation, climate risk, and diversification into renewable energies.

Engagement with fossil fuel companies has had mixed success. The world’s largest energy company, Exxon, has refused to respond to shareholder engagement on climate change since 1996. Other energy giants Shell and Total have taken small steps such as cutting back on tar sands oil production and not prospecting in the arctic while oil prices are low. They are also diversifying into renewable energy production with the aim of being 2 degree compliant by 2035.

When engagement is carried out in collaboration with other large portfolio holders there is more clout. This is the purpose of the Institutional Investors Group on Climate Change (IIGCC). Joining this group is another positive step as long as the RCB follows the IIGCC investor guidance on engagement.

What is vital is that the RCB sets out aims for its engagement strategy. It needs to follow the IIGCC guidance and publish detailed carbon foot-printing of its investment portfolio, set clear targets for timely reduction in greenhouse gas emissions in its portfolio and decide to divest if these targets are not met. The RCB needs to report each year on its engagement actions. 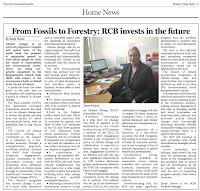 The RCB Environmental Policy has evolved over the past several years. However, environmental sustainability is an area of rapid development and therefore policy is dynamic. Actions taken to date have included:

Divestment from thermal coal is a positive first step. Many institutional investors have also taken this step, notably the Church of England Church Commissioners. It is interesting that the Church Commissioners also ruled out investments in tar sands oil extraction. Extracting oil from tar sands produces three times the CO2 emissions from regular oil drilling, devastates large tracks of boreal forest, and produces massive amounts of pollution. The Church of Ireland does not have any investments in tar sands, but they did not rule out investments in the future.
The RCB should use tools produced by the likes of the Carbon Disclosure Project to estimate the carbon footprint of its investment portfolio and publish targets for reducing the carbon footprint.


Whilst supportive of a transition to a low-carbon economy, the RCB recognises that energy is an input used in virtually all economic activity, and access to energy is thus of decisive importance to global welfare and development.

Furthermore, energy substitutes available at reasonable prices (taking subsidies into account) are currently inadequate and immediate action could result in fuel poverty for some of the least developed and vulnerable nations.

To claim that immediate action by the RCB, to presumably divest from all fossil fuel energy companies, could result in fuel poverty in less developed and vulnerable nations is simply wrong. The UN’s World Health Organisation states that climate change and air pollution from fossil fuels are drivers of poverty and poor health in developing nations. Worldwide there are 7 million deaths from air pollution related to fossil fuels. Millions more suffer from hunger due to drought and failed harvests.

The World Bank also supports investment in renewable energy technologies as one of the keys to global development. Worldwide the uptake of renewable energies grew 2% between 2010 and 2012 but in East Asia uptake was 42%. In 2015 £196Bn was invested in renewable energy worldwide, of that £107Bn, more than half took place in countries such as China, India and Brazil.

Immediate action to increase investment in renewable energy is exactly what the developing nations need to help improve global welfare, health and development.


The view is that ethically motivated exclusion of all coal and petroleum companies based on their products alone (consumption is equally important) would not be appropriate at this time.

Investments in fossil fuel companies provide funds for production: to drill new oil wells in remote parts of the world including the arctic, open new gas fields using fracking and other new drilling techniques, and constructing new pipelines to transport more tar sands oils. To stay within the 2°C threshold fossil fuels must be kept in the ground and the best way to do this is to remove investments from coal, oil and gas production.

Consumption of energy depends on what energy is available. Divesting from fossil fuels and investing in renewable energy technologies will accelerate the roll out of infrastructure that will allow consumers to choose clean energy sooner.


The Church of Ireland incorporates integration of climate-change risks and opportunities into investment decisions as well as its other ESG (environmental, social and governance) criteria.

Consideration of the financial risks from potentially ‘stranded assets’ must be assessed as part of the investment decision making process.

The signals from chief economic advisers such as Mark Carney of the Bank of England are that the risks from climate change are a clear and present danger to investors. The risks include fossil fuel stranded assets but also include other risks to non-fossil fuel equities, for example insurance companies could suffer massive payouts following natural disasters related to climate change.

All in all it is good to see Sarah Dunne, the investment manager at the RCB, present a detailed explanation of their climate change policy.  Thank you for doing so.  I hope that the comments above will add to the RCB's thinking in this important area.

Unknown said…
"The UN states that global warming is unequivocal and it is caused by human activity, primarily by burning fossil fuels. The Secretary General of the UN, Ban Ki Moon said, “Climate change is an existential threat”. Climate change is the most serious problem humanity faces."

One could always pray that Trump will win the election and help start the demise of the UN.....

OK, I joke (a bit), but it does amuse me that some in the church take UN pronouncements as holy writ.

As regards the increased climate chaos - when was the the last time that a Cat 3 hurricane made landfall in the US.
I know Katrina was a great poster child for the climate chaos theory folks, but subsequent years have been eerily quiet.

Will be interesting over the next few years to see if the current hype about the "hottest year ever" will die down with the end of the rather short El-Nino that we have just had.
3:28 PM