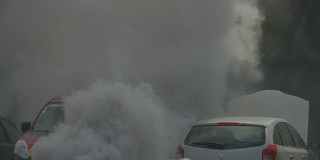 A report by the International Energy Authority (IEA) states that air pollution from fossil fuels has become a major health crises and is responsible for 6.5 million deaths worldwide each year. The report states that the problem of air pollution is growing and the health impacts risk intensifying in the decades to come if nothing is done.

In 2015 the Head of the World Health Organization, Margaret Chan has said that, “Air pollution is one of the most important health risk factors globally, comparable to tobacco smoking”. She was commenting on a report from the Lancet, the world’s foremost medical journal, that highlighted the risks of air pollution from fossil fuels.

The Irish government's Environmental Protection Agency states that air pollution is directly linked to 1,200 premature deaths per year mainly around large cities and towns as a result of traffic emissions.

The Church of Ireland seeks to be a responsible investor that integrates environmental, social and governance (ESG) policy into investment decisions.  In fact in its 2016 annual review the Investment Committee of the Representative Church Body (RCB) states that,

The RCB believes that organisations which manage ESG factors effectively are likely to create sustainable value over the long term and hence are considered an essential component on investment analysis.

The RCB does not invest in companies where more than 10% of the revenue is derived from strategic military sales or from the manufacture of tobacco products.  Why is this the case? Presumably because it is unethical to invest in products that are directly harmful to humans.  In 2016 the RCB updated this policy to include companies where more than 10% of turnover is derived from coal mining – one of the most polluting fossil fuels.  But the RCB still has millions invested in fossil fuel companies.

Whilst not investing in coal is a good first step, the evidence is clear that many of the health risks from air pollution are coming from particulate emissions from transport, especially diesel fuelled vehicles.  The IEA report states that more than half the world’s NO2 emissions are from diesel vehicles. A recent report on air pollution in London also showed a correlation between areas of high NO2 pollution and poor educational attainment.  It is clear that coal is not the only killer fossil fuel.

Cars do not run on coal.  The health risks are from all forms of fossil fuels and the time is right for the Church of Ireland to divest from all fossil fuel investments.