March 29, 2018
At the 2017 Church of Ireland General Synod a motion was passed to divest from coal and tar-sands. This blog post explains how it happened.

We met in Bobby Byrne’s Pub for dinner in Limerick after the 2017 Church of Ireland General Synod.

Motion 11 on climate change and fossil fuel investments had just been passed. It committed the Representative Church Body (RCP) to divest from coal and tar-sands, reduce the carbon footprint of the investment portfolio, support collaborative engagement, and divest from oil and gas companies that are not serious about the change to a low carbon economy.

Over dinner I was asked by some friends, ‘How did you learn about church divestment from fossil fuels?’

I explained what had impacted me, ‘A few years ago my passion for climate justice was lit after the Super Typhoon Haiyan disaster in the Philippines. This was the strongest storm ever to make landfall and 7000 people were killed, millions were made homeless, and it cost the country billions.’

'At that time I read an article by an Edwin Gariguez, a priest and environmental activist, who said, ‘The Church cannot remain a passive bystander. It is our moral imperative to give voice to the voiceless’.

‘The Church cannot remain a passive bystander. It is our moral imperative to give voice to the voiceless’.

I told my friends, ‘Edwin Gariguez used scripture like a prophet in Biblical times. It was a verse from Proverbs that ignited a fire in within me.’

'Proverbs 31:8 says,
Speak up for those who cannot speak for themselves,
for the rights of all who are destitute.
Speak up and judge fairly; defend the rights of the poor.'

Climate justice is about the poor

'Through this scripture, I realized something fundamental - climate justice is about the poor.'

I’d come to understand that climate change is not simply about melting ice caps and polar bears. Greenhouse Gases from fossil fuels are causing profound climate changes that impact on people through more frequent and intense storms, droughts, and floods. Countries are becoming unstable, conflict is growing and the refugee crises is spreading.  The church has a moral obligation to act for climate justice.

Edwin Gariguez also said in his article, ‘If it is wrong to wreck the planet, then it is wrong to benefit from its wreckage; a growing global movement to divest from fossil fuels takes this ethos at heart.’


‘If it is wrong to wreck the planet, then it is wrong to benefit from its wreckage; a growing global movement to divest from fossil fuels takes this ethos at heart.’

I explained, 'The article by Edwin Gariguez introduced me to divestment. So I decided to do some research on the Church of Ireland investment funds.'

I'd discovered some useful information online. The General Synod publishes reports on its investments (in NI and RoI) each year. They also publish an annual Book of Reports for General Synod. It reads like an annual report in many respects, full of tables of accounts, but as they say, "Follow the money", so I kept looking.'

The 2014 General Unit Trusts Summary Report indicated that the Church of Ireland was invested heavily in fossil fuels. In fact, four of the top 10 investments, more than 4 million Euro, were in oil and gas companies. The largest single investment was in Eni, a company that aimed to drill in untouched arctic waters.

I told my friends, 'I discovered that the RCB had millions invested in fossil fuels.'

'At the same time, the Bishops Appeal were seeking to raise funds for victims of Typhoon Haiyan. Parishioners around the Church of Ireland donated £240,000 to the appeal. But I realised something profound - the RCB was funding fossil fuel extraction, that made hurricanes like Haiyan worse, but then it appealed for funds to help the victims!' 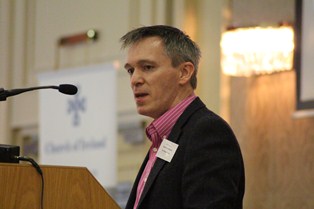 'So that was when I decided to call for the Chruch of Ireland to divest from fossil fuels. I gave a short speech at my first Synod in 2015.’

One of my friends asked, 'How did you go from raising the issue just two years ago to having the Representative Church Body propose the motion, rather than proposing it your yourself as a private member?’

Several steps led to this point, so I summarized them, ‘I set up a blog called TheTrews.com about the Church of Ireland and climate change. I used social media to spread the message and I wrote letters to the Church of Ireland Gazette. As a result, several Diocesan Synods passed motions calling on the RCB to divest from fossil fuels. Then I heard that the Executive Committee was discussing the subject so I knew that the message was getting across.'

'I decided to write a draft motion for possible submission to General Synod in 2017 and circulated it to some friends for comment.’

‘About two weeks later I got a surprise phone call from the Chief Executive Officer of the Representative Church Body.  He had read the draft motion and wanted to see if an accommodation on the wording could be reached. He put me in touch with the RCB Investment Manager who is their lead on ethical investments.’

‘The RCB proposed an alternative draft that was more closely aligned with their policy. But I could not agree to it. The good thing was that they were open to my suggested changes. I recommended a line about an on-going reduction in fossil fuel investments and strengthened the statement on divestment for companies that do not take the issue seriously. I compromised and let go on a commitment for full divestment in 2017.’

‘The RCB were good enough to ask me to propose the motion and member of the executive was the seconder. I was absolutely delighted when the motion was passed.’

Speak truth to power but speak with grace

My clergy friend said, ‘It was remarkable that the RCB proposed this motion. So what have you learnt?’

I thought about this for a moment and answered, ‘I think it demonstrates that speaking "Truth to Power" actually works. When presented with the facts, that the RCB was investing in something that was harming the poorest in the world, they decided to improve their investment policy around climate change.'

'I also learned that to speak with grace was important. The RCB are gentle-folk and ranting and raving is simply not the right approach.'


Speak up for those who cannot speak for themselves

My friends asked, 'So what are the next steps?'

'Well, there is still some way to go', I answered, 'The RCB still invests in fossil fuels and they must take the step towards full divestment soon. Other institutions, especially universities, have done this. If churches take a lead on this issue, calling for society to turn around, then ordinary people will notice. They then might be a little more willing to listen when we say there are other things that society needs to turn away from too.'

'The most important thing I have learnt is this - speaking up on behalf of the those who cannot speak for themselves can be a powerful force for change.’