This article was first published in the Church of Ireland Gazette 31 March 2017.

The Irish Parliament has become the first country in the world to vote for full divestment from fossil fuel companies. It is a move based on ethical principles and increases pressure on Churches in Ireland to do the same.

The vote in the Dáil means that the €8 billion Ireland Strategic Investment Fund must sell its shares in coal, oil and gas companies over the next five years.

The Irish Parliament has joined a divestment movement that started in 2008 and is now worth $5 trillion dollars globally. 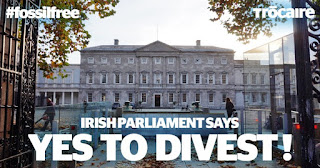 The movement started when a group of university students decided to take action. The students had learnt that 80% of existing fossil fuel deposits must stay in the ground to avoid dangerous climate change, so their message was simple: if you are not careful, your fossil fuel investments might become stranded and worthless.

Investing in fossil fuels seems an increasingly risky business when a new energy revolution has begun. And the transition to clean energy is accelerating following the Paris Agreement.

The question can be asked as to whether divestment is a wise move in uncertain times. The example of coal is worth considering.

Since the 1850s, coal has been the mainstay of energy production in the UK. In 2013, coal generated 40% of electricity requirements but since then there has been a dramatic decline in its use.

The students of the divestment movement, now organised under the 350.org banner, told their story in universities, hospitals and churches, and the success was more than they could have imagined.

A report published in December 2016 found that 56,000 individuals and 688 institutions had divested $5 trillion dollars globally from fossil fuel shares.

Some notable investors who have fully withdrawn their funds are: The Rockerfella Fund, The British Medical Foundation, The Quakers in Britain, The Lutheran World Federation, the Church of Sweden and the Anglican Church of South Africa.

Archbishop Desmond Tutu was an early backer of the campaign and in 2014 he said:“People of conscience need to break their ties with corporations financing the injustice of climate change.” 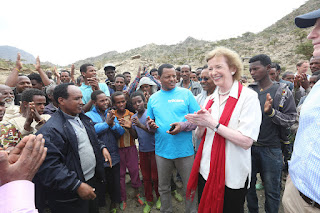 In Ireland, Trócaire has led the campaign and encouraged Maynooth University, Trinity College Dublin and the Mary Robinson Foundation to divest. Mary Robinson highlighted the impact of climate change on a visit to Ethiopia in July 2016:

“Now, because of climate change, it has become so bad. And it really is bad… it is bad here in Ethiopia, where they do good climate work, where they cope well with climate and they're used to it.

"Yet they now have 10.3 million additional people who are malnourished and could suffer very badly before the end of this year…

"It brings home to us that we must cut emissions very fast. Ireland must become more of a leader in understanding the importance of renewable energy.” (Newstalk, Pat Kenny Show, July 2016 from Ethiopia)


The key breakthrough for Trócaire’s campaign came when independent TD Paddy Pringle won the vote for full divestment in the Irish Parliament. Speaking about the Bill, Paddy said:


“This principle of ethical financing is a symbol to these global corporations that their continual manipulation of climate science, denial of the existence of climate change and their controversial lobbying practices of politicians around the world is no longer tolerated.

“We cannot accept their actions while millions of poor people in underdeveloped nations bear the brunt of climate change forces as they experience famine, mass emigration and civil unrest as a result.”


Ireland is now notable for its leadership in fossil fuel divestment.

The Representative Church Body (RCB) is responsible for the €250 million of Investment Funds of the Church of Ireland.

Figures on how much of the funds are invested in fossil fuels are not published by the RCB.

The Book of Reports, published each year for General Synod, does list some fossil fuel companies in the top ten investments. In 2015 the RCB reported to Down and Dromore Diocese that €6.2 million was invested in oil and gas companies.

The RCB does take this issue seriously, and in 2016 it released a policy on climate change and ruled out investments in thermal coal mining companies.

The climate change policy focused on collaborative engagement with oil and gas companies with the aim of persuading them to reduce their carbon emissions.

One thing is clear - we are in a changing world. The climate is changing and there is a new revolution in energy production. The movement calling for divestment from old dirty fuels, to reinvestment in new clean energy is growing.

With the vote in the Dáil, Ireland now is a world leader in the divestment movement.

The pressure is now on the Churches in Ireland to increase their ambition, to take the ethical lead and to call society to change direction towards a clean energy future.