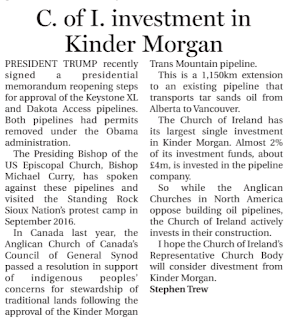 Here is the letter to the Church of Ireland Gazette published 3 Feb 2017. This version includes reference sources -

President Trump recently signed a presidential memorandum reopening steps for approval of the Keystone XL and Dakota Access pipelines. Both pipelines had permits removed under the Obama administration.

The Presiding Bishop of the US Episcopal Church, Bishop Michael Curry, has spoken against these pipelines and visited the Standing Rock Sioux Nation’s protest camp in September 2016.

In Canada last year, the Anglican Church of Canada’s Council of General Synod passed a resolution in support of indigenous peoples’ concerns for stewardship of traditional lands following the approval of the Kinder Morgan Trans Mountain pipeline.

This is a 1,150 km extension to an existing pipeline that transports tar sands oil from Alberta to Vancouver.

The Church of Ireland has its largest single investment in Kinder Morgan. Almost 2% of its investment funds, about £4m, is invested in the pipeline company.

So while the Anglican Churches in North America oppose building oil pipelines, the Church of Ireland actively invests in their construction.

I hope the Church of Ireland RCB will consider divestment from Kinder Morgan.