Parishioners from Down and Dromore Diocese #SpeakUp 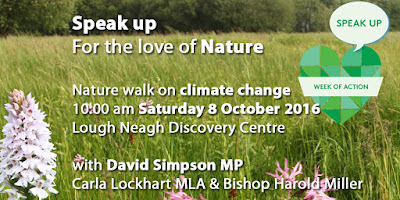 Parishioners from Down and Dromore Diocese will join with Bishop Harold Miller to ‘speak up’ for the people, places and things they love that will be impacted by climate change. They have planned a nature walk in association with the Climate Coalition on Saturday 8 October to let David Simpson MP know they care for creation.

The organiser, Stephen Trew from Magheralin Parish said, “In recent years we have seen severe weather impact across the island of Ireland, such as the flooding last winter. Climate change is starting to be felt right here. On the news there are tens of thousands of refugees escaping countries hit by drought, failing harvests, hunger and conflict. We need to take action quickly to reduce greenhouse gas emissions to protect the things we love – from habitats in a local nature reserve, to farms in Africa that are suffering crop stress due to a changing climate. This nature walk is a chance for people to let our MP know we care about climate change.”

Local student Josh Norton added, “Climate change is a major factor in so many of the world’s problems – from the displacement of people due to the poverty and hunger caused by failing harvests, to air pollution related deaths in our major cities. It is time to pressure the government into taking this issue seriously to safeguard the welfare of our planet for future generations.”

The nature walk starts at 10:00 am on 8 October 2016, near the playground in the car park at the Lough Neagh Discovery Centre, Oxford Island, Craigavon. The free guided walk, on accessible paths, will point out wildlife and habitats in the nature reserve and it will last for about 20 minutes.

Afterwards in the Discovery Centre, there will be a 20 minute question and answer session with David Simpson MP and Carla Lockhart MLA, chaired by Bishop Harold Miller. During this time participants can hear more about how greenhouse gas emissions in Northern Ireland can be reduced and David Simpson MP will be encouraged to press the UK government to quickly ratify the Paris Agreement on Climate Change and act to help people suffering around the world.

The ‘Speak up Week of Action’ is a nationwide campaign for local people, community groups, biodiversity action groups, churches and schools (church resources and school’s packs are available online). It is organised by The Climate Coalition – a network that brings together over 100 organisations including Christian Aid, Tearfund, RSPB, Friends of the Earth, Oxfam, Greenpeace, WWF-UK, & CAFOD.

Stephen Trew added, “I was approached by Christian Aid to ask my local MP in Upper Bann if I could do something. I did, and he was kind enough to agree. I’m looking forward to lots of people showing their love for nature on Saturday 8 October.”

For more information on the Nature Walk see the Facebook event page – bit.ly/SpeakUp8Oct