March 02, 2007
The Dengue Fever has now made international news. Today this report was on the BBC 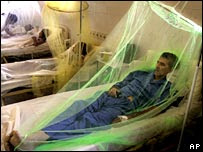 Paraguay has declared a 60-day state of emergency to deal with an outbreak of dengue fever which has killed at least 10 people in the past two months.

Officials say 14,654 people have been diagnosed with dengue.

But doctors say the figure is 10 times higher, and are worried about a new more virulent variant of the disease. Read more.

The other day a young SAMS volunteer who has only been in the country a month was hospitalized with Dengue. He had been ill then started developing nose bleeds. The missionary family has was staying with were pretty worried it could be hemorrhagic Dengue so they took him straight to hospital. After a day of test and a night in hospital for observation he was allowed home again. It looks like a bad case of classic Dengue.

We also took Eiljah and Hannah for Yellow Fever vaccines last weekend. There already is Yellow Fever in Boliva and doctors are predicting it will spread to here.