Back from Easter holiday 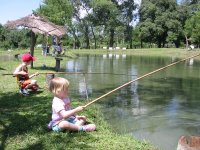 We started back to school after a week's holiday. We had a very relaxing week that included a fishing trip where we actually caught one.

Easter Sunday was good. The highlight was the kid’s illustration. We have a hollow stone that kind of looks like a tomb and it was used as a display at the front of church. Using a Playmoboil figure as Jesus we rolled toilet paper around it to represent the burial clothes. Just before placing Jesus wrapped body in the tomb I slipped the figure out. Hannah, being one of the women, came forward first to look in the tomb. She looks in, then turns and announces totally spontaneously, "He is not here, he is alive!". The boys came up next to examine the wrapped body. When they did not see the Playmobil figure they said in genuine surprise, "He's not here! Did you take him, did you do magic?” We think they understood the point.

Afterwards we saw many of the street kids the Spanish speaking church is ministering to. Our church bought a washing machine and donated clothes. So now when they come to church they are given a shower, clean clothes, and some breakfast. It is good to see them in something clean and decent to wear rather than filthy clothes they are usually in.