We arrived in Curitiba yesterday after a 17 hour bus journey from Asuncion. We came on the Pluma coach from Asuncion - Pluma is by far the best coach company we have used. It was the Cama (sleeping) service which was extremely comfortable and an easy way to cover the 17 hours. We're staying in the Hotel Del Rey which is a very nice hotel and reasonably priced for one dead in the centre of the city. We were blown away by the shopping in Brazil, it's just like a european city. You see how poor Paraguay is when you compare Asuncion to Curitiba.

Curitiba apparently has one of the best public transport systems in the world the guide book says. There are these cylinder like bus shelters and super effecient various coloured buses everywhere. 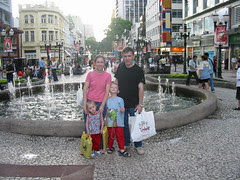