Yesterday just after our church had finished we realized something serious was happening when lots of ambulances went flying along the road in front of school. Then police pickup trucks acting like makeshift ambulances went past with burn victims in the back. They were going to the nearby Emergency Hospital. 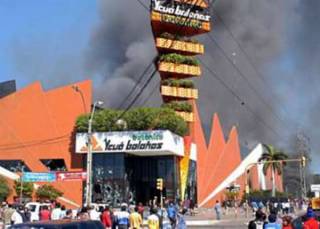 This morning the shock of the full extent of yesterday's fire disaster sunk in.

Parguayan colleagues came to school with news that our Domestic Science teacher is in intensive care with life threatening burns to her lungs. Also a cleaner's brother had been killed. Later we heard a pupil from the Annex School had died with her preschool sister and cousin. Also some of the maintainance team had nephews killed. Asuncion is small enough for us to know people with family members directly affected. Reports now say 350 killed and 500 injured, perhaps 50% under 13 years old.

The supermarket is about 3 miles from school. It's one we often passed, some Missionary colleagues often had lunch there or regularly shopped there - the Principal and Vice-Principal, Mags & Gwen live about 50 metres away! It had a large resturant and on a Sunday lunchtime would have almost 1000 shoppers. The most shocking thing is the report that security guards locked the only usable exits to prevent people leaving without paying!

Our school was designated a donations post for medicines which were urgently requested. The system here is that patients pay for medical supplies and drugs. So hospitals do not keep large quantities in stock and were overwhelmed. Staff, pupils and parents who came to volunteer help were greatly shocked by it all.

Medical staff from surrounding countries are flying in to help and are willing to take serious burn victims. The Anglican church here is seeking to raise $8000 to buy respirators so victims can be moved safely. There is a Paraguayan Dioscecan fund in the U.K. that you can donate to help if you wish. Please contact www.SamsIreland.com.

Personally we are fine, very shocked at the scale of it all and concerned for Gloria our Domestic Science teacher. Keep us all in your prayers.