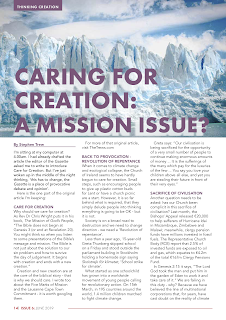 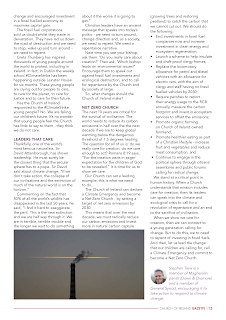 Here is the one part of the original article I’m keeping:

Why should we care for creation? As the Rev Dr Chris Wright puts it in his book, The Mission of God’s People,

"The Bible does not begin at Genesis 3 (or end at Revelation 20). You might think so when you listen to some presentations of the Bible’s message and mission. The Bible is not just about the solution to our sin problem and how to survive the day of judgement. It begins with creation and ends with a new creation."


Creation and new creation are at the core of the Biblical story - that is why we should care.

I wrote too about the Five Marks of Mission and the Lausanne Cape Town Commitment; look, just Google them.

For more of that original article go to my blog www.TheTrews.com

When it comes to climate change and ecological collapse the Church of Ireland has hardly begun to care for creation. Small steps such as encouraging people to give up plastic cotton buds for Lent or have a church picnic are a start, but they are so far behind what is required that they simply delude people into thinking everything is going to be OK - but it is not.

Society is on a broad road to destruction and we need to change direction - we need a 'Revolution of Repentance'.

Less than a year ago, 15 year old Greta Thunberg skipped school on a Friday and stood outside the parliament building in Stockholm holding a homemade sign saying skolstrejk för klimatet, ‘School Strike for Climate’.

What started as one schoolchild has grown into a worldwide movement of young people calling for revolutionary action. On the 15 March 2019, in 195 countries around the world, 1.4 million children marched to fight climate change.

Greta says, “Our civilisation is being sacrificed for the opportunity of a very small number of people to continue making enormous amounts of money... It is the sufferings of the many which pay for the luxuries of the few... You say you love your children above all else, and yet you are stealing their future in front of their very eyes.”

The question needs to be asked,  has our church has been complicit in this sacrifice of civilisation? Last month the Bishops’ Appeal released €20,000 to help sufferers of Hurricane Idai in Mozambique, Zimbabwe and Malawi; meanwhile, clergy pensions have millions invested in fossil fuels. The RCB report that 2.5% of invested funds are exposed to oil and gas; this equates to €4.2m of the total €167m Clergy Pensions Fund.

In Genesis 2:15 it says, “The LORD God took the man and put him in the Garden of Eden to work it and take care of it.” We are failing in this duty - why? Because we have believed the lies of multinational corporations that, for years, have cast doubt on the reality of climate change and encouraged investment in a fossil-fuelled economy to maximise capital gain.

The fossil fuel corporations sold us doubt whilst they trade in devastation. They have led us down the road of destruction and we need to stop, wake up and turn around - we need to repent.

How has the Church of Ireland responded to the #ClimateStrike young people? Silence, nothing. We are failing our children's future. It's no wonder that young people feel the church has little to say to them, they think we do not care.

Thankfully, one of the world's most famous naturalists, David Attenborough, has shown leadership. He must surely be the closest thing that the secular sphere has to a Pope. He said about climate change, "If we don't take action, the collapse of our civilisations and the extinction of much of the natural world is on the horizon." Commenting on the fact that 50% of all the world's wildlife has gone in the last 50 years he said, “I find it hard to exaggerate the peril. This is the new extinction and we are half way through it. We are in terrible, terrible trouble and the longer we wait to do something about it the worse it is going to get.”

Christian leaders have an ancient message that speaks into today's politic - we need to turn around, change direction and, as a society, we need to repent. We need a repentance narrative.

Next time you see your Bishop ask them, “Do you really care about creation?”. Then ask, “Which bishop leads on environmental issues?”. Encourage them to speak out against fossil fuel investments, ecological destruction and to call for repentance by the church and by society at large.

So what changes should the Church of Ireland make?

The next ten years are critical for the survival of civilisation. The world needs to reduce its carbon emissions in half over the next decade if we are to keep global warming below the dangerous threshold of 1.5 degrees heating. The question for all of us is, do we really care for creation, do we care enough to act? Romans 8:19 says, “For the creation waits in eager expectation for the children of God to be revealed.” It is time for us to show we care.


Our church can set a leading example, this is what we need to do:

The Church of Ireland can declare a Climate Emergency and become a Net Zero Church - by setting a target of net zero emissions by 2030.

This means that over the next decade we must radically reduce our carbon emissions and invest more in natural carbon capture (growing trees and restoring peatland) to catch the carbon that we cannot cut out. We should do the following:


We stand at a critical point in human history. When a church understands that mission includes care for creation then its leaders can speak into the climate and ecological crisis to call for a revolution of repentance and an end to the sacrifice of civilisation.

When we show we care for creation, then we can connect to a young generation calling for change. But to do this we need to repent of investing in fossil fuels. And then, let us lead the change that our children are calling for, call a Climate Emergency and commit to become a Net Zero Church.

Today, hundreds of thousands of children are marching for a better future. They want immediate action on climate change and they understand how radical a change that needs to be.  The movement was started by a lone voice - Greta Thunberg - a sixteen-year-old from Sweden. She started the #Fridays4Future movement by leaving school each Friday to stand outside the parliament in Stockholm with a sign calling for climate action. I proposed that she should be nominated for the Nobel Peace Price in February and just this week it was announced she was one of the nominees. If public pressure rises then she will win this prize - let's make it happen. Dear Nobel Committee, I’d like to nominate Greta Thurnberg for the Nobel Peace Prize 2019. Her #schoolstrike4climate action will save millions of lives and reduce the suffering of millions more. @GretaThunberg @NobelPrize #Fridays4Future #climatestrikes #NobelPeacePrize pic.twitter.com/BiqtAf7cZS — Stephen Trew (@stephentrew) Feb
Read more