Showing posts from November, 2017
Show all

The RCB invests in ExxonMobil, a company that ‘promoted doubt’ about climate change. 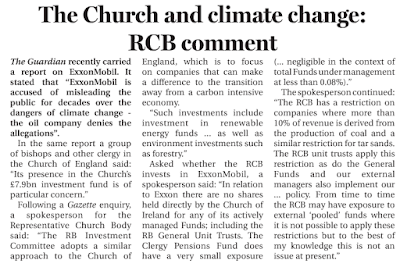 A group of Anglican Bishops and clergy recently called upon the Church Commissioners and the Church of England Pensions Board to "show moral leadership" by divesting from fossil fuels, and divest from ExxonMobil in particular. See my earlier blog post . In a letter to the Guardian newspaper, the group cites a recent journal paper analyzing ExxonMobil’s activities from 1977-2014 that concludes: ‘ExxonMobil contributed to advancing climate science – by way of its scientists’ academic publications – but promoted doubt about it in advertorials.’ The Anglican group's letter concludes, "Now is the time for decisive action. We call on Church of England investors to take the lead and immediately divest from ExxonMobil." The Church of Ireland in recent years has changed its fossil fuel investment strategy by aligning it to the policy to the Church of England. At General Synod 2017 a motion was passed that committed the RCB to: excluded investments in coal and tar s
Post a Comment
Read more

As people of faith, we don’t just state our beliefs — we live them out. One belief is that we find purpose and joy in loving our neighbors. Another is that we are charged by our creator with taking good care of his creation. Justin Welby,  from an opinion piece in the New York Times, 4 Nov 2017.
Post a Comment
Read more 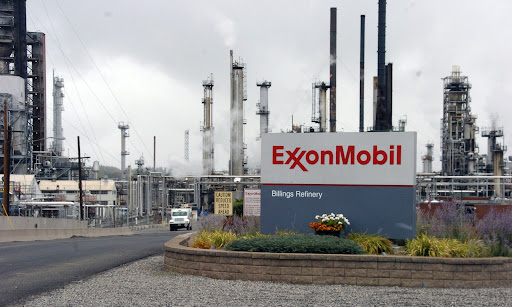 A letter in today’s Guardian calls on the Church of England to divest from ExxonMobil because of its deception about climate science and the increasing risk posed by climate change. The letter, which is signed by 4 bishops and numerous clergy, concludes, "Time is running out to prevent the worst impacts of climate change. While some governments and companies pursue policies that are leading us in the wrong direction, the Church of England is uniquely placed to show moral leadership through its investment policies.  Now is the time for decisive action. We call on Church of England investors to take the lead and immediately divest from ExxonMobil." It is good to see a voice from the Church of England calling for increased urgency with divestment. The Church of Ireland has taken steps in recent years to reduce its investment in fossil fuels. Since 2015 the Representative Church Body has excluded investments in coal and tar sands and reduced investments in oil and gas
Post a Comment
Read more
More posts